No, I'm not heading off on a cruise or a trip to the sunny south, unfortunately. But that doesn't mean we can't enjoy the flavours of the Caribbean mid-winter!

Des and I are part of a potluck-style supper club that hosts an 'International Night' once a month. There are five couples, each of us taking our turn as 'hosts' about twice a year. The hosts choose a country and a date, then each couple then brings a dish of their choosing from that country. This month, our hosts decided to go with a Caribbean Winter theme, which was a lovely pick-me-up of flavours on a bleak February day.


Don't you just love the chalkboard. Our hosts usually use this to keep their weekly family meal plans noted, so everyone knows what's on the go. They wiped the slate clean for our get-together.
Our menus usually come together pretty well with an appetizer, a main and some sides and a dessert. Sometimes the menu includes our own 'twists' on the regional dishes, usually depending on our access to ingredients (we do live on an island in the middle of the Atlantic after all, so exotic and ample options are not easy to come by!). We've also had a few 'misses' on dishes, but overall each night is a new experience and we regularly say 'this is probably the best night yet!'.
This time we started with Des & my appetizer - beer battered coconut shrimp with an orange rum sauce (recipe below). The shrimp recipe is delish, one I picked up in a cooking class I took last winter. The sauce was a bit too sweet for my taste, though I only had the tip of a spoonful for quality control purposes given it contained rum and I'm preggo! (We also used non-alcoholic beer for the batter, in case you were concerned for my baby's well-being!). Next time, I'd decrease the orange marmalade and up the rum for sure. Despite my review, the shrimp and sauce were a huge hit! 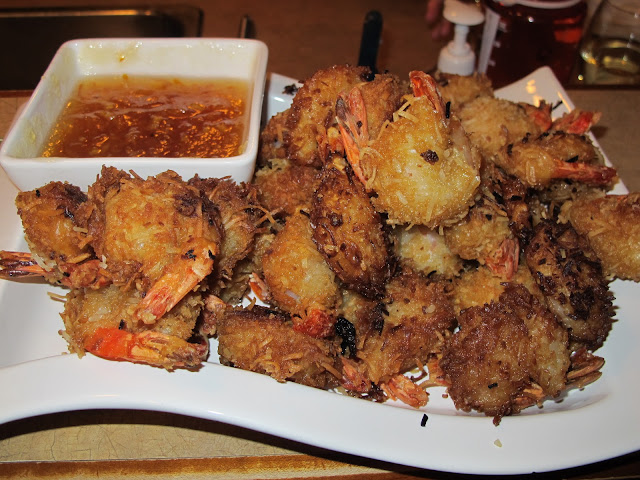 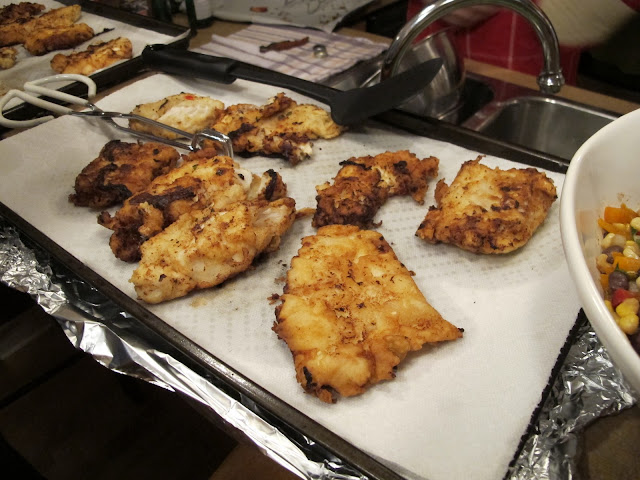 The island-style cod, which was absolutely fantastic. I believe it was marinated in cream and hot peppers, giving it the perfect amount of heat. Then lightly battered and pan-fried. So very tasty! 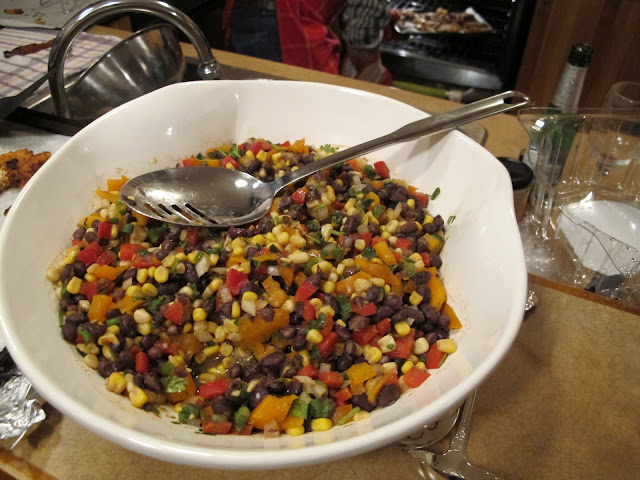 The Caribbean salad was chock full of beans, corn, peppers, onions and flavourful herbs and spices. Served on a lettuce leaf it was one of my favourite parts of the meal. 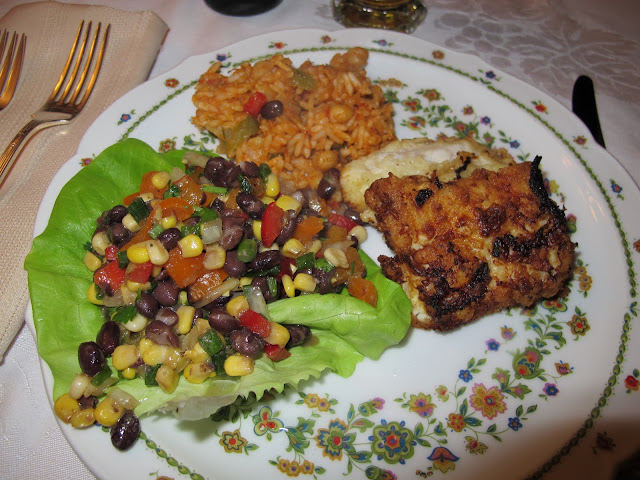 I didn't get a good pic of the rice and beans, but you can see them on the plate. We usually go with a self-serve approach and, as you can tell, my focus was getting a tasty helping of each dish and not on plate presentation!

The meal was then topped off with the most delicious dessert I've had in a while: Chocolate Natillas with Coffee Bean Granita.
﻿ ﻿ 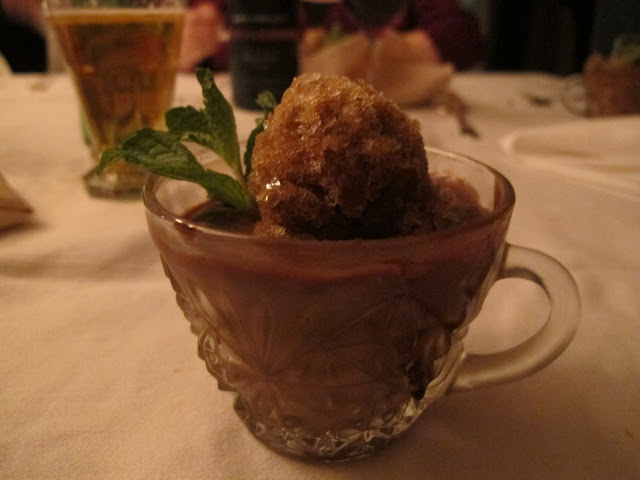 The dessert was like a very rich chocolate mousse topped with a light and flavourful coffee granita. You could tell it was a HUGE HIT as conversation stopped for about 10 minutes while everyone enjoyed every single spoonful. There may have even been some bowl-licking going on. Just saying. It was that good! 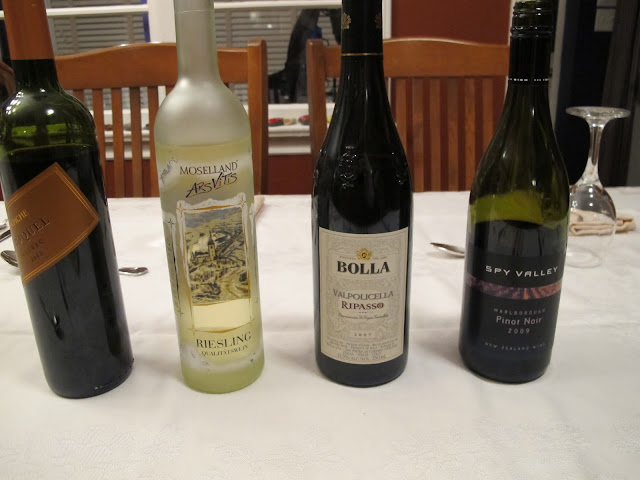 And of course, what's dinner without a nice bottle of wine. Depending on the country, we sometimes try to pair regional wine and other times (like when you know the region isn't known for great wine) we just go with a usual favourite. Or in my case, I went with one of the non-alcoholic beer left from the shrimp batter.

All in all another awesome evening of great food, great conversation and even better company.

1. Peel and devein shrimp, leaving tail piece intact. (or buy already peeled/deveined like I did!)
2. Combine 1 cup of the flour with the beer, baking soda, salt, cayenne pepper and egg in large bowl, Whisk until smooth.
3. Put other cup of flour in another large bowl. Dredge shrimp in this flour.
4. Put coconut in a bowl.
5. Holding shrimp by tail, dip in batter (allowing excess to drip off) and then dip in coconut. Press coconut into shrimp to help it stick. Transfer to parchment lined baking sheet until all shrimp are battered.
6. Fry shrimp in vegetable oil in batches of about 8, turning once, until both sides are golden. About a minute total. Serve with dipping sauce.

Combine marmalade and rum in a small pot. Simmer over low heat on stove for about 5 minutes. Serve warm or cool.