My One Little Word

As noted in my post on New Year resolutions﻿, I have a less than traditional perspective on the subject. Not to repeat myself too much, but often New Year's resolutions attempt to ‘fix’ things about ourselves, rather than accepting what's already great about ourselves and looking for opportunities to tap into that more in the year ahead. For me, I wanted 2011 to focus on strengthening myself rather than on "fixing" things. Nuance perhaps, but an important one in my mind.

Ali Edwards One Little Word concept is a fantastic way to do that. You can read all about the premise behind it here, but in essence it is selecting a word that has meaning for you and that you want to invite into your life in the New Year. On the surface it is certainly less concretely action-oriented than a traditional resolution, but it leaves you ample opportunity to make it what you want. To live it in a way that's true to you.

I've followed along with Ali's past OLW journeys on her blog, always enjoying her thoughts and perspective. I decided that 2011 was the year I'd join her. I'd find that one little word that was personal and that would help me create a more meaningful 2011.


So, back in December when Ali said she'd begun thinking about her 2011 OLW and prompted her readers to do the same, I did. And my word really just came to me without much effort. Though strange to say, in a way my word picked me, not the other way around. That word is {open}.
Why open? Well, as I was thinking about choosing a word, I thought more about what lay ahead for me in 2011 and what I wanted to learn from the year, what I wanted most from the year. What lies ahead is quite likely the most meaningful, life-changing experience I will ever have - becoming a mother. Everything about this experience is unknown to me and I knew, I know I want to be fully open to what it will bring. The changes, the love, the life. Everything. Anytime I thought about the year, the experience, becoming a mother, the word open seemed to be present. So I knew, it was my word for 2011.
Now. not to sound to zen. I also know enough about myself to know that I just can't pick a word and let that be it. As much as I believe New Year's resolutions often have the wrong focus, I do believe in planning, action, and goal-setting. If I don't write it down, if I don't plan to make it happen, then it won't.

So I didn't just say 'ok open' let's be friends in 2011. Instead, I enrolled in Ali's online OLW class, which includes monthly prompts to help keep this word top of mind. For me this is key. Otherwise, I've no doubt that when there's a crying baby at 3am and I'm exhausted, open would fall off the back of that wagon never to be seen again. (In fact at 3am, I'd likley be waving goodbye as I untied Mr. Open and pushed him from his hitching post). Instead, through the OLW class, I'll be reinvited (at a sane hour) to reflect on those moments and use my word to learn, to be stronger and to live more meaningfully through it all.

One of the by-products of the class is creating an album. And yes, while this attracts many a scrapbooker, you certainly don't have to be one to follow the general premise and make this concept work for you. A plain old journal would likley work equally as well. Or a blog. (Another thing I'm hoping will help me keep my OLW top of mind in 2011).

As a scrapbooker, I will be building my personal OLW album as we go along. Here's a glance at some of the pretty papers I picked up at the Paperie to use in my album over the year. 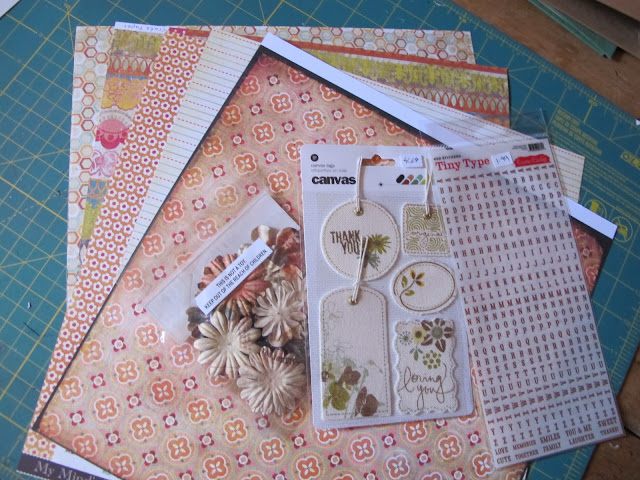 ﻿
So far, my OLW album is in early stages. I've completed the January prompts and have started to put some of the pieces together. The page protectors I ordered from Two Peas just arrived yesterday, so I'm looking forward to putting those pieces into the actual album, and sharing some pics, soon.
What about you, do you make resolutions, pick a word, or otherwise plan for the year ahead?
Posted by Colleen Ryan at 1:14 PM