With Christmas around the corner and me past the halfway mark in my maternity leave, I can honestly say time is just a ticking along. I'm not sure how my little guy has gone from brand spanking new to 7 months old already, tis craziness I tell ya, craziness! 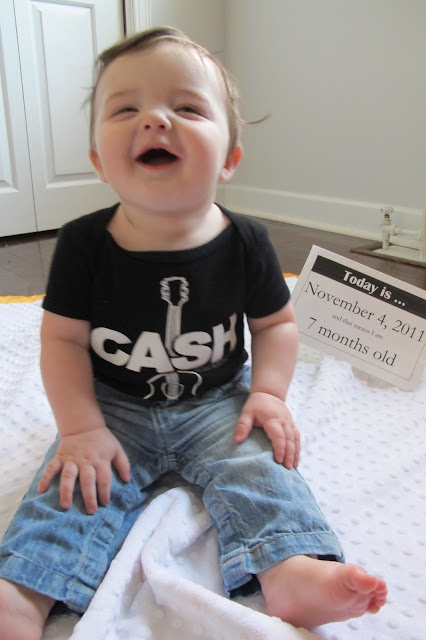 ... an eating machine. He gobbles up cereal like there`s going to be no more cereal ever again. He expressed a strong dislike of chicken and carrots, but bring on the peas, sweet potato, squash, blueberries, and bananas. Up next, avocado, corn, broccoli, and beans. Mmmm.

... sitting up straight as a whip. He`s strong little dude who went from solo-sitting/listing to sitting straight as can be in a matter of days. He can now reach, twist, and turn without toppling.

... is rockin` the crawl stance. He gets up on all fours and rocks back and forth and back and forth for a bit before he splays out like a little froggie again. He hasn`t yet figured out the one hand, one knee combo to crawl yet, but I can see it coming. I best get the play area child-proofed!

... still teething. The poor little guy is all drool and chew, no teeth. Hopefully he`ll get a little reprieve when those first pearly whites pop through. His smiles stops my heart now, and with teeth, God help me.

... digging the forward facing stroller position. Up until recently, we usually just kept him in his car seat which attaches to the stroller. It was easier than taking him out, strapping him in and then doing the same again with the car seat afterwards. Now though, he can see the world and loves it. He`s as quiet as a mouse looking and looking as far as his eyes can see. He was also much happier in the carrier once I switched him from facing me to facing out. The little nosy boots.

... about 19lbs8ozs and well over two feet tall. He`s in the 90th percentile for his height to weight ratio, making him mama`s chunky little monkey. We had to go out and get the bigger car seat as his infant one only goes to 22lbs! I expect we'll install that between now and Christmas for sure.

... making a Santa`s list. Well, not really, but mama is. We`re working on getting Santa and mama/daddy to keep things to a minimum. Lord knows we don`t need more plastic stuff and clutter around here. And we`re pretty sure the relatives will spoil him beyond for his first holiday season. He also wants to make sure we pick up a few special treats for the Single Parents Association to make sure all the little boys and girls have gifts under the tree.
... reaching out to mama and daddy. It`s super cute. He doesn`t so much reach up and out as if to say pick me up, more like he turns toward us when we`re playing with him and tries to crawl into our laps. We love it.

... discovering his voice more and more. He babbles and screams and coos. I`m pretty sure his first words are coming soon. And if I were a betting woman, I`d put money on `dada` being the first word up. I`m almost convinced he`s already said it, but dada disagrees and calls it babble.

... stylin' the hair. His head of full hair remains, though it had thinned out a bit around the sides for a while giving him a toupee look. Or, as we sometimes call it, his Donald Trump look. It's starting to fill back in again and I expect it won't be too long before that first haircut!

... a blessing in our lives and makes us smile every single day. Love you little man.

Love the new header, Colleen! How did you make it?? :)