We are just one month from his first birthday. What the? I swear we just brought the mite home from the hospital. I’m sure it was yesterday. Oh wait now, I know it wasn’t because I actually slept fairly well last night, which I didn’t do for the first 9 months of his life. Yes, that must actually mean we are closer to one year than one day. 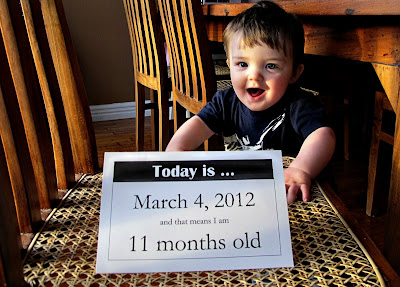 
... is free standing. Yep, he can now stand all by his lonesome for quite a bit of time. Even longer if he's distracted. ... is a much better sleeper than he’s ever been. We’ve had a few rough nights of late thanks to teething, but for the most part he’s sleeping pretty much through the night since early January, or at least goes back to sleep easily on his own if he does stir. And naptimes are no fuss, no muss 99% of the time. Amen + Hallelujah!... yes, he has taken his first steps. They were tentative and just a few, but he’s getting there. He keeps trying on his wobbly little legs. Oh, hold on to your hats folks once this little man starts running because he ...

... is super destructive curious. There is no keeping him still. He wants to be moving, exploring, picking, and poking. So far we’ve lost one coat button, one crib mobile, one computer key, two door stoppers, and countless rolls of toilet paper.  Fun times. 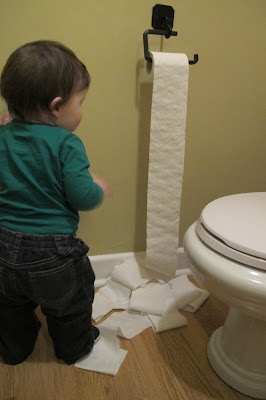 ... still only says da da da. Seriously child? I birthed you out my va-jay-jay and you still only say dada. Kidding. I know once mama starts there’ll be a day I’m wishing he never spoke the words in the first place.

... has had his second haircut. Yep, not one tooth. Not even one year old and he’s had two haircuts. It turned out a little short/uneven thanks to his continuous curiousity and desire to move while scissors were in his face. Oh child o mine.
... will pretty much go with anyone. Thankfully for us, he’s not overly shy and we can leave him with pretty much anyone familiar and he doesn’t fuss or cry for us when we leave. Thankfully, this allows us to have an (albeit limited) social life.

... is afraid of the vacuum. If I need to vacuum I have to pick him up and hold him in one arm and vacuum with the other. Oh the irony, given the vacuum was used to lull him to sleep for the first half of his life! Hmm, maybe that’s the issue?
... is getting pretty good at feeding himself. We still lose bits and pieces in transit, and blackberries and blueberries are a bit of scene once he's done, but he can really make good headway with stuffing his sweet little face all on his own. 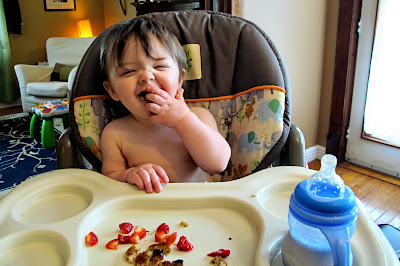 ... is showing early signs of being a leftie. I know that trait doesn't really become prominent until he's a couple of years old or more, but you can certainly see he favours his left. When he started rolling, he could only roll to the left for the longest time. When he started grabbing and reaching, he would use mostly his left hand. And now he uses his left hand to pick food up and put it in his mouth (see above!), with the right being brought in for backup. I guess we'll have to wait and see!
... is our smiley bates. He really does smile most of the time and laughs with ease. Whether it’s us, our family, or a stranger, he’s quick to smile his gummy grin and get all the attention he knows will ensue.
... the sunshine in our days. Love you little man!
Happy 11 months HP!!

Happy 11/12th's little one! Love that toilet paper shot. I think one of the reasons the first year goes so fast is that beginning part where you are sleep walking through the day!

Awesome idea for keeping up with those little ones! Love it!

His cheeks are to die for! Very cute.

Found you on Simple Things.

Happy 11 Months Hudson! Looking more and more like your father each day. Love to all. Lesley

Someone (maybe it was you) passed along a VERY helpful hint regarding Toddlers vs. Toilet Paper when I was complaining that I have to hide my TP from my mischevious cat Milo...

Turn the toilet paper around!

Sadly, this did not work for my cat who shreds the TP, but it's a great hint for moms with a TP-Toddler issue :)