And that was February. Well almost. Week 8 in the Project Life album wrapped up the last full week of February. A few extra days will carry on in Week 9, but can you believe that we're this far into the year. Yowzers. Anywhoooo, here's a quick look at the two-page spread for Week 8: 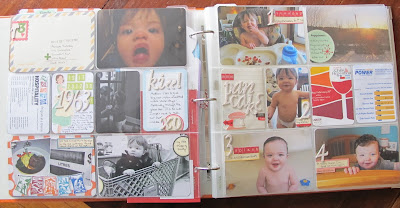 Noted this week: Hudson's open-mouth kisses, a work road trip for Des, Pancake Tuesday shenanigans, longer days, and a wine show. On the left hand side I included a couple of pics of Hudson kissing mommy through the glass door, the view was too cute not to capture! 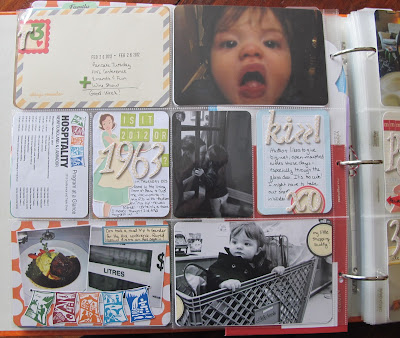 A couple of things I like about this page are the bits and pieces from Des' work trip. He was awesome and took iphone pics, so I included those along with a the conference logo banner, which I cut from one of the conference pieces he brought back. I also stuck the small conference agenda in one of the pockets.

I also added a card without a picture capturing a story from that week: me vacuuming at 8am in my PJs one morning with Hudson hoisted on my hip. Des walked in before heading out to work and laughed, saying it looked more like 1963 than 2012 ;) I had some leftover stickers from a scrapbooking class I did that and the lady in her apron and casserole worked perfectly here. 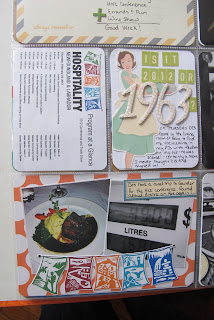 On the right side, I numbered a series of photos from Pancake Tuesday that show Hudson from start to finish after enjoying the sticky sweet goodness for the first time. The card that has the word pancake on it is a folded card, so I included the pancake recipe on the inside. I also included a photo of the sunsetting, taken on a day when I first really noticed how the days were getting longer. For the last two smaller slots I stuck in a corner from our light bill, which I thought was a good complement to the longer days. and a trimmed section from the wine show book cover. Love including these odds and ends along with our photos. 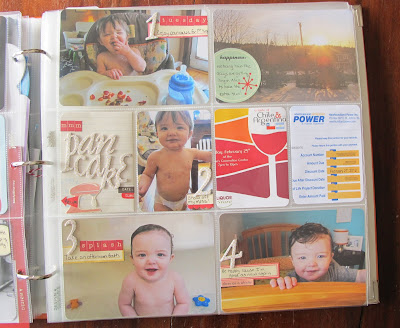 Thanks for dropping by!

Love it. Thanks for visiting today and leaving me a link to your pages-I like how you just took snippets of things, like the light bill, and included it in the smaller slot. Great idea. Might try that next week with my own...