With my half marathon completed under time, I spent the rest of last Sunday and Monday celebrating my accomplishment. I was relieved to have it done and ready to rest up. On Monday, I happily designated the next few days for R&R – rest and recovery. After a visit to the physiotherapist, those few days turned into a whole R&R week, which was a-ok by me!


In the last six to eight weeks of training, I was feeling my right hip quite a bit. Not so much during the run, but certainly afterwards. Especially when going from sitting to standing and when taking those first few steps. I knew it was running related issue, but put off physio until after the race. It wasn't extremely painful, it wasn’t slowing me down, and I was in no way ready to slow on training that close to race day. I did make an appointment though for the week right after the race.
In the first few days of the week, without any running on my agenda, the ache had subsided, confirming my suspicion of a running injury. At physio, we determined it was a typical running injury related to a tight IT band (the muscle/tendon that runs from your hip to your knee). Fortunately, I caught the issue early enough (though perhaps heading in before the race would have been even better!) that a few stretches and some foam rolling to release tension and loosen everything up should take  care of it in no time. My physiotherapist suggested really taking it easy, focusing on stretching and foam rolling, and very easy runs for the rest of the week, easing back into more regular running next week. No prob said I!


I actually decided to skip the easy runs altogether and spent the week kicked back. There was no lunchtime running, instead lunch dates with friends and taking care of a few outstanding errands. There was no post-work run crammed in before supper, instead I cooked leisurely or enjoyed a BBQ, cleaning up as I went, freeing up post-supper time to play with the boy. 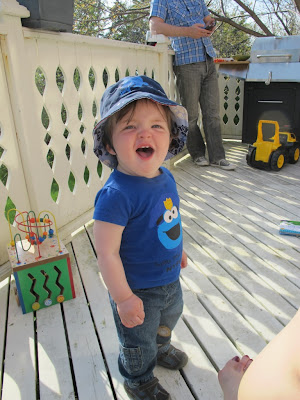 The extra time even meant a nice glass of wine on a warm sunny evening after the boy went to bed: 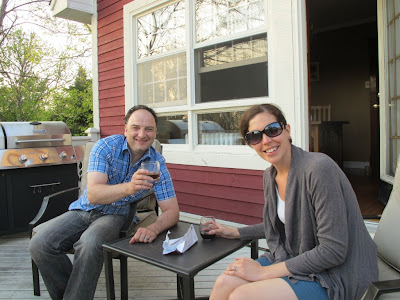 There was no weekend long run either. Instead, I indulged in a celebratory supper with friends (an amazingly delicious dinner with amazingly delicious wine!), time with my family, some extra zzz’s, and plenty of time-wasting on the internet via Pinterest, Facebook, and my google reader. It was awesome all around. Exactly what the doctor physiotherapist ordered.


That said, as much as I enjoyed the week of R&R and can feel the improvements in my hip already, I’m missing that running schedule. Now, I didn’t say I’ve come to like running, but I do feel the lack of activity in my muscles, my bones, and my brain. Starting today that changes again. I’ll begin to ease back in with a few short, slow runs (likely inside thanks to the damp chilly forecast) and see how it goes. I’m hoping to be back to a longer run on the weekend and settling into a new running schedule that works by next week.
As tired as I was from running and training before the race, I guess sometimes a little R&R is all you need to get the mojo back again.
Posted by Colleen Ryan at 7:00 AM