I find it interesting how routines change. One day we're entrenched in them, can't imagine doing things any other way. Life works perfectly just as it is and, as the saying goes, if it ain't broke don't fix it. Yet somehow at sometime, those routines change. Sometimes it's a sudden change, brought on by a big trigger (oh let's say, something like having a baby, or at least that's what I've heard) and other times, it happens so gradually you're completely unaware of it until what used to be no longer is.

That latter is where weekend breakfasts fall in our house. When we were first together, Des and I started going to Auntie Crae's on Saturday mornings for breakfast. Like clockwork, we'd head downtown for coffee, scones and the Saturday papers. If we happened to sleep in closer to lunchtime (I know, I know, those times are soon to be long gone, thank you growing-baby-in-my-belly), it might've been sandwiches instead of scones. But, for the most part, the routine was the same. We got to know one of the cashiers, Christine, by name. We knew what goodies were likely to be in the display case and which special treats were worth changing up the norm for. We went to Auntie Crae's almost every Saturday morning for several years. And it was perfect. It was us.

Auntie Crae's is no longer (insert sad face here), but that wasn't what caused a change in our weekend routine. I can't even recall what did. All I know is that somewhere along the way, we began staying home on Saturday mornings. We began brewing coffee using this coffee pot and whole beans from Coffee & Co. We began making homemade versions of Tims-style breakfast sandwiches, only healthier and tastier. We switched from reading the newspaper to readings news websites and surfing the web, while some cooking or car show ran in the background. While the core elements remained the same - enjoying each other's company, coffee, tasty treats and catching up on the news - the where and how had changed. Yet, it too was perfect. It too was us. 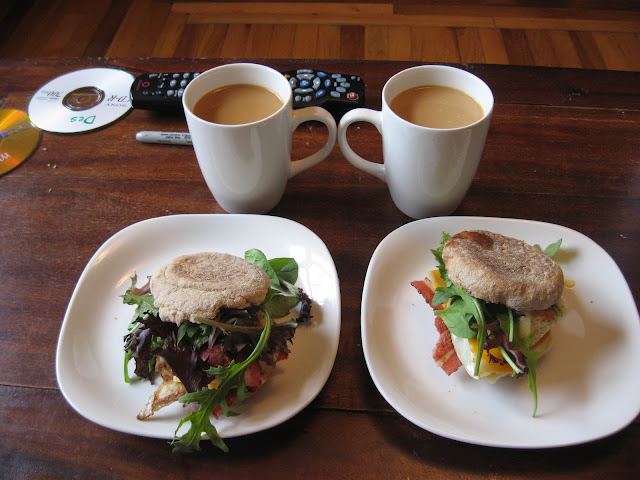 Now I'm noticing it is changing again, albeit only ever so slightly. While coffee and news at home is the same, we've started to introduce blueberry pancakes into the mix. Having seen a recipe on TV one morning (ironically, it was probably some Saturday morning while eating breakfast sandwiches) I tested it out one weekend. They were not only healthy, but hearty and delicious and have been edging their way onto the weekend breakfast menu more and more. So much so that I've nearly depleted my frozen stash of berries months earlier than usual ... thank goodness mom has more!


Certainly far from a significant change in routine, it is just blueberry pancakes after all, it did trigger a moment of reflection. I wonder what Saturday morning's will look like 3 months from now, with a newborn in our lives. What about 3 years from now, with a toddler? Or even 13 years from now with a teenager? Somehow I think I can safely say that sleeping-in will no longer be on the schedule, nor will the leisurely simultaneous web surfing. I'm also going to bet that coffee will increase in prominence (and value!). Otherwise, it's anyone's guess what routine will shape Saturday morning in the Ryan household. But one thing I do know is that it will be like the routines that preceded it. It will be perfect. And it will be us.
Posted by Colleen Ryan at 2:55 PM