My book club meets tonight, so I thought I'd give you a quick review of this month's selection: Annabel by Kathleen Winters. Before I do, however, allow me to preface my review with some context.


My Book Club
First, I love my book club. We're a wonderful bunch of 10 women who like to get together as much, or perhaps more, for the night out, the conversation and laughter, and the good food and wine as for the literary conversation. We're a little atypical in the realm of book clubs in that we spend more time socializing than we spend talking about the plot, characters and intricacies of our most recent selection. In fact, more often than not one or two of us may not have read the book and another couple haven't finished it. I am totally ok with that. Not everyone would be, but I am.
For me, the book club gets me reading. Something I adored as a child - I used to devour books the way I now devour dark chocolate - but struggle to make time for as an adult. I get to read a selection I may not have otherwise chosen or found the time to read. Whether I talk about it ad naseum is just not as important to me. The book club also allows me to hang out with a group of women from different professional, family and personal backgrounds. I love the perspective that brings - both in discussing the book and in discussing life. And I have fun. We head out to dinner or cafes or someone's house where there is invariably great food, great wine and lots of laughter. For me, our book club works perfectly, if atypically. And given we started as a small group of about 5 and quickly grew to about 10 as others asked to join us, I'm guessing it works for the others too!
Second, I like write, but am far from an author. I like to read, but am far from a literary expert. I know what I enjoy and what I don't in a book and usually know why that is the case. Capturing that in reviewer-ese, not so much my thing. So please keep that in mind as you read my review below, or at any point in the future.

My Review
Now, onto Annabel by Kathleen Winters. Short-listed for the 2010 Scotiabank Giller Prize, here's what the book jacket had to say about what fell between the covers: 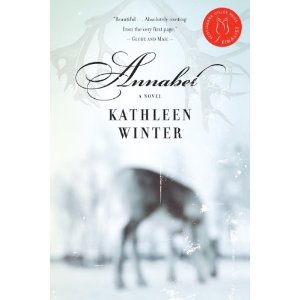 In 1968, into the beautiful, spare environment of remote coastal Labrador, a mysterious child is born: a baby who appears to be neither fully boy nor girl, but both at once. Only three people are privy to the secret -- the baby's parents, Jacinta and Treadway, and a trusted neighbour, Thomasina. Together the adults make a difficult decision: to raise the child as a boy named Wayne. But as Wayne grows to adulthood within the hyper-masculine hunting culture of his father, his shadow-self -- a girl he thinks of as Annabel -- is never entirely extinguished, and indeed is secretly nurtured by the women in his life. Haunting, sweeping in scope, and stylistically reminiscent of Jeffrey Eugenides' Middlesex, Annabel is a compelling debut novel about one person's struggle to discover the truth in a culture that shuns contradiction.
In essence, Annabel is about ﻿a baby born a hermaphrodite in rural Newfoundland and Labrador in the late sixties, growing up as a child through the 70's and into a young adult in the 80's. Even in today's world, the circumstances of his child's birth would be, unfortunately, challenging, stigmatized and misunderstood, let alone forty years ago in coastal Labrador.
Kathleen Winters does a wonderful job of capturing the nuances in her writing. While a little too prose-ish for my liking and perhaps drawn out in places (I prefer my reading to be straightforward ... have I mentioned I'm a Type A personality?) there's no discounting the detail and thought she placed into the every word on every page. Through her narrative you come to feel what the main characters must be feeling and can empathize with each, despite their varied actions.
For example, the decision is made to raise the child as a boy, Wayne and to not tell Wayne the truth, yet each of the main characters approach that choice differently. His father, Treadway, is a hunter and man of the Big Land who tries to pull out Wayne's masculinity at every turn. His mother, Jacinta, is a city girl at heart who mourns the loss of her daughter wanting to both encourage Wayne's feminine side and to keep it hidden for his own protection. The family friend, Thomasina, is the only other person to know the truth and openly calls Wayne 'Annabel' after her dead daughter, really wanting him to know about who he is. Through it all Wayne battles with both sides of himself. Still, despite wanting to hate Treadway for some of his actions, wanting badly for Jacinta to follow the truth and wanting Thomasina to cross the line even more, Winters' narrative allows you to understand them all and appreciate the basis of their individual choices.
While the heart of the book centres around sexuality in the unfolding story of Wayne, I found myself thinking less about that than I did about how the book reflects on us all as individuals, families and society. So often we all try to be something more or less, or something we're not, in the name of fitting in. From the time we're small children, we learn there are social norms to be followed, personalities that are accepted and ones that are not. Our parents encourage the norms in our behaviours, with only the best intentions at heart, to help us encounter less adversity as we grow. Wayne and his family were no different. A choice was made that his family believed would make life easier for him. As a child, even knowing something was different, Wayne conformed. Society has expectations and, sadly, it is easier to fit them than fight them.
Through Wayne's character development, I found myself reflecting on how important it is to be ourselves. To allow, and encourage, our loved ones to do the same. To play our role in society by not judging and forcing our views on others. Eventually, many of us find that true self but, as was the case with Wayne, it is often not until much later and after much heartache. For Wayne, it came gradually and hit home when he was on a Boston college campus realizing he finally 'fit in', but that was only when 'fitting in' meant being as different as everyone around him. It doesn't have to be that way. We don't have to wait to 'find ourselves'.
I think this was why my favourite character throughout the book was Wally, Wayne's childhood friend. Wally knew who she was as a young girl. She didn't care what others thought of her and that confidence made her popular until 'mean girl' syndrome of her classmates kicked it. Even then, Wally didn't care. She loved to sing, sang incessantly and had a dream of singing opera. Despite a childhood accident that ruined her voice, she held onto that dream in her heart. She followed it to Boston where she lived with her Aunt, who encouraged and supported her. In the face of adversity, doubt, and challenge, Wally lived her life true to herself and was better off for it. Perhaps that's why Wayne was so drawn to her in friendship.
Yes, there is much more to this book in terms of conflict and juxtapositioning, gender and sexuality issues, character development, and so on, but again I do not profess to be an expert reviewer. I just know what I took from it in my read and that's the two cents I'll throw in over mexican food and a virgin margarita later this evening. Overall, I enjoyed the book and the perspective and certainly recommend it to anyone looking for an interesting, well-written and thoughtful read.
Posted by Colleen Ryan at 4:36 PM