I’ve always believed the philosophy that ‘what goes around comes around’. Normally, I think of it in work contexts, trying always to treat those I work with respect and courtesy even during challenging times. You just never know when the person you’re working with will be making decisions that will impact on you and you’ll want the same courtesy and respect in return. However, the ‘what goes around comes around’ philosophy also applies in social and personal contexts as well, as was the case for me last night.

You see, my darling husband has been known to drive the car around town with the gas light on for quite some time before stopping to fill it up. He has also been known to run out of gas (ahem, on more than one occasion). To the point that it had become a point of fun contention. The banter goes something like this:

• We drive around with the bright orange warning gaslight glaring on the dashboard.
• I suggest we stop for gas.
• He says we have 70kms before we’ll run out. Or something to that effect.
• I say “it’s on you mister if we run out” or something like that.

And the process repeats itself the next time the little orange gas tank appears on the dashboard. Somewhere in there, I forgot that ‘what goes around comes around’. What’s that saying about karma again? Well, karma found me yesterday.

I took the car to work, not realizing the gas light was on until after dropping D off. As D was initially driving, I didn’t know exactly when the light came on, but figured it wasn’t more than 15kms or so before that point. I quickly crunched the numbers calculating those supposed 70kms the car can go before running out of gas, figured I was good and continued on to work. I went out at lunch to grab a sandwich and then to my hair appointment after work. After that I headed downtown to pick up D, only he decided to continue working for a bit so I headed home by myself. At no point did I think about gas. Somehow, I was oblivious to the orange gas tank on the dashboard. 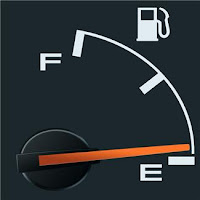 It wasn’t until I was on the highway en route to my humble abode that I realized I was getting close to that 70km cutoff and immediately planned to stop at the North Atlantic to fill ‘er up. Only I didn’t make it. Clearly I underestimated the mileage capacity of the Jetta when on E. I never claimed to be a mathematician.

The car gave up running on fumes on the Outer Ring Highway just before my exit. It’s 8pm. I’m 8 months preggo. It’s dark. It’s cold. It’s snowy. I’m hungry. I’m tired. Thank you Mr. Karma. Thank you very much. I call my husband so he can figure out how to get the car home from the side of the highway. Then I call a cab to come take me home. Then I realize my phone battery is essentially dead. At least Mr. Karma cut me some slack and allowed me to make two phone calls before cutting off access to the outside world. He’s not all bad I suppose.

Morals of the story:

• Always fill up the gas tank when that orange tank lights up your dash.
• Always charge your phone. You never know when you’ll need it for something important.
• Always remember, ‘what goes around comes around’. Especially when mocking your husband’s penchant for not filling up the tank and then running out of gas.

I hope Mr. Karma treats you better than that this weekend. TGIF.
Posted by Colleen Ryan at 12:17 PM

Glad you made it home ok. Yikes! I sometimes push the limits of my gas tank too, but obviously not as brazenly as the Ryans :-)

Your husband sounds like a real ass. Hi Honey.
D

Great time for Karma to take a nibble on the old posterior cheek hey!? I have to admit I giggled a little to myself...and glad you arrived home safe!