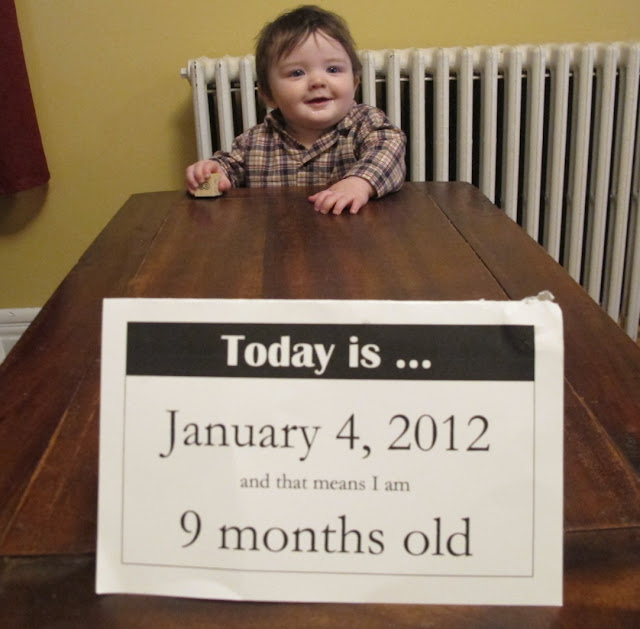 ...crawling fast. He can make good time between points A and B, almost too fast to catch sometimes.

...pulling himself up. On everything.  Up on the sofas and chairs. Up on the drawers and cupboards. Up on the TV stand and coffee tables. Up on the walls. I'm sure he does it just because he can.

...cruising along. He gets himself standing on something, like the sofa or coffee table, and "cruises" right along to wherever he thinks he needs to be. Apparently a sure sign walking isn't far behind. Oh my.

...not interested in Christmas. He picked a bit at a few ornaments, but otherwise didn't bother with the tree or decorations. He was equally non-plussed by the presents, paper, and boxes. The box of mum-mums in his stocking being the exception. I expect next year will be a different story.

...our little Bam-Bam. Oddly enough, for as uninterested in Christmas as he was, he loves to pick and poke. He's constantly reaching for anything he shouldn't - think wires (even when well out of reach!), radiator knobs, door stoppers, garbages. Sure he hauled a door stopper clear off the wall. There was a flick, flick, flick, and then a yank. Alas, he's {slowly} learning the word 'no'.

...still has nary a tooth. He asked the mall Santa for his two front teeth for Christmas, but as Santa explained that was a hard one to pull off. So, here we are with all the drool, chewing, and restlessness of teeth with not a pearly white to be seen.

...our little turkey. He's almost 23lbs, two and a half feet tall, and growing like a weed. He's just fitting into his 6-12 months clothes and easily wears most 12-18 month size with just a touch of room to spare.

...sleeping like he doesn't need too. Seriously. You'd think by 9 months he'd be starting to settle into almost sleeping through the night, but nope. We're all up at least three times a night, sometimes much more than that. I'm hoping that the appearance of a few teeth will help resolve this little issue.

...a pleasant, sweet-cheeked, smiling baby boy. Despite the very interrupted and sleepless nights, he's as good as gold during the day. Tis hard to stay frustrated by the time when sweet face is smiling at you at 6am from over the side of the crib.

...has the bestest belly laugh. It comes easy, is highly contagious, and is quite honestly the most awesome sound in my world right now.

XOXO. Momma and daddy love you to bits.
Posted by Colleen Ryan at 11:31 AM