Runday Monday: One Half

Throughout the spring I vowed I`d run once I got the hang of caring for a brand-spanking new babe. During the summer I vowed to run, sometimes. In the fall, I vowed to run more and more consistently. Though I did run, it certainly wasn't more often or more regular. With the onset of the new year and the winter, I will keep this vow. You see, I have no choice. I've committed to running a half marathon in May. Committed to who you ask? Well, committed to me. But as that's sometimes just not enough to get my patootie off the couch and putting one foot in front of the other, I'm also committing it here online, in writing, to all of you.

There it is in black and white. No takesy-backsy. Nothing like putting something in writing and telling someone about it to make it real. To make me accountable. I know this from experience in running a marathon 10 years ago. OK, wow, where did that time go? Anyways, I signed up for the race, in writing, I told people about it, and even had a friend on board with me before I truly realized what I`d done. I guarantee you I would never have seen it through if I hadn`t. And there were many days on that gravy train where I was rueing my lofty ideas and big mouth. Many, many, many days. But alas, I said I would, so I did, and once it was done, it was awesome. So here I go again. 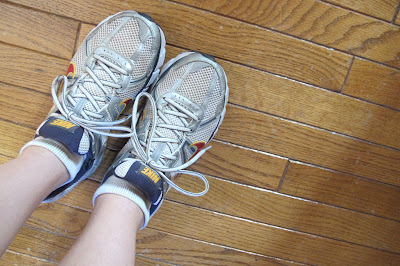 You may ask why, if I`ve already done a marathon, I`d bother with the half. Well, first of all, I have a life list of things I want to do in my lifetime. Both a half marathon and a marathon were on that list. Most people would have started with the half and then moved onward. Being me, I went in reverse. Good thing too, as I think if I`d run the half I may never have the gumption to do the double distance. As it is, it took me 10 years build up my reserves for the half! I also swore I`d never do another marathon and, while I believe one should never say never, right now I can muster the 13.1 miles, not another 26.2. At least not yet. So a half marathon it is.

Yes, I guess I could have crossed off both when I did the marathon, as technically I did the half and then finished with the full marathon, just all in one race. But that wasn`t my intent when I wrote up my life list (which I keep intending to share here and will soon!). I want to be true to myself and mark both complete,  in honesty. With that, training for the 2012 Bluenose Half Marathon in Halifax, NS began last week with my training plan`s first tempo, easy and long runs. I got my sweat on and loved it. But it`s early and the hard parts are really still weeks away, so stay with me on this one ok?