Earlier this week CBC aired a story about kids who self-feed versus being spoon-fed (sorry I couldn't find the online link to share it). In short the story indicated that recent research showed kids who start self-feeding earlier have lower risk of obesity later on than kids who are spoon-fed. They learn to control their amount of food intake - that whole stopping when full concept - and gain an understanding of satiety. Makes sense, as I know from watching HP that he will eat as long as I'm lifting a spoon to his mouth. It is habit for him I think, more so than hunger, as he often clears every bowl of food unless it's something he really doesn't like (enter broccoli).

The same story also talked about how many parents don't self-feed earlier and continue to spoon feed purees, soups, and mashed food longer out of fear of choking. In talking to D about it, I thought about my approach to feeding HP. He can chew small pieces of food quite easily, including Cheerios, toast, and assorted veggies and fruit. However, while I regularly include bits of food on his tray, I tend to spoon-feed him most of his meal. The result is that he waits for me to put food in his mouth rather than reach for what's on his tray. Easier I suppose. In fact, it's easier for both of us and I realized that's why I do it. Not because I'm afraid he'll choke, but rather because it's easier and faster for me to spoon-feed than let him attempt it solo.

Oy! I had a moment of realizing I am doing it for him rather than letting him truly figure it out on his own because it's easier for me. In my mind's eye, I looked ahead to the many things he will have to learn to do on his own from tying his shoelaces to finishing the science project to washing his laundry. I quickly realized there will be many occasions where it will be easier for me to do it for him, but that won't really help him in the long run. So yesterday we attempted our first real focus on self-feeding. On the lunch menu were favourites including avocado, raspberries and grain puffs.


I put cut up pieces on his tray and sat down with my lunch. Instead of feeding him a bit and then eating a bit of my own, I enjoyed my sandwich, talked to him, and let him play with the food on his tray. I did show him how to pick it up and encouraged him to mimic my actions. Lo and behold, he did OK solo! First he just moved things around on the tray: 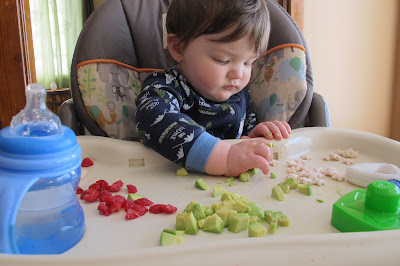 As I continued to eat and chat, he started picking bits up and bringing them to his mouth. While not always most efficient - we lost quite a few pieces in transit! - he did manage to get some in his mouth and continued to try. Once I was finished my lunch and did assist him some by picking some up and feeding to him and picking some off the tray and letting him take it from me. But for the most part he managed solo and it was quite cute to watch him work those puffs around in his hands and into his mouth! 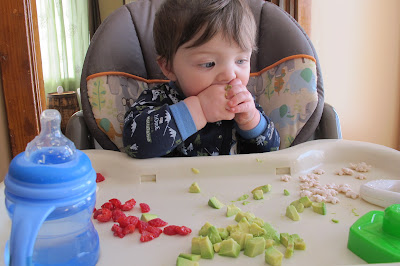 It took much longer before we completed lunch - as in 45 minutes or more - but that was OK. I  actually noticed how he give indication he was done after a while, though whether from boredom or satiety I don`t know. Either way, I think learning taste, texture, feeding and satisfaction are all healthy habits to form early on. Sure some days there will be more assistance and spoon feeding when we need to get out the door or if we`re out and about, but I will definitely continue to encourage the self-feeding. And at the end of it, the whole thing just made him happy. 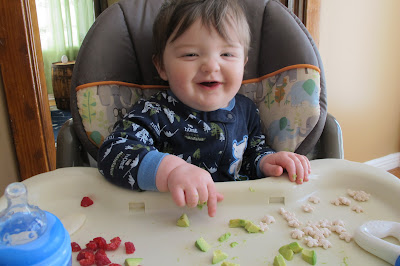