Today Hudson Peter turns one year old. It doesn't seem that long since we first brought him home, just a teeny. Yet somehow, we have had a whole year blessed with this little man in our lives. It is awesomeness defined. 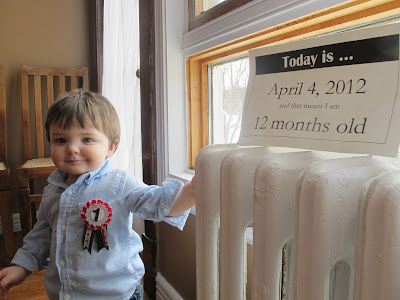 ... is walking. Sratch that, he's almost running. After taking a few steps here and there, about two weeks ago he just decided he was ready to go. He literally turned on his heel and took off. And he's been going ever since. 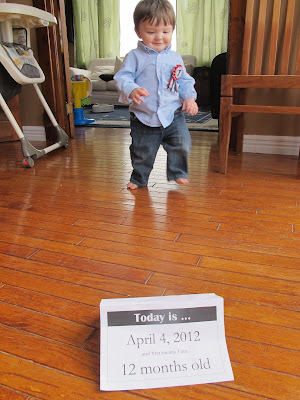 ... weighs almost 25 pounds. He's our little turkey. Chubby legs you could long to chew on!

... still toothless. Yep, at one year he's had two haircuts, but still no teeth. I guess he's going to be like his mama who was over 13 months before she got hers.

... has a sweet "tooth". Maybe there's no teeth to speak of, but the little guy is like his mama in the sweets department. The odd nibble of a cookie is never resisted. And he did a number on the chocolate birthday cake. 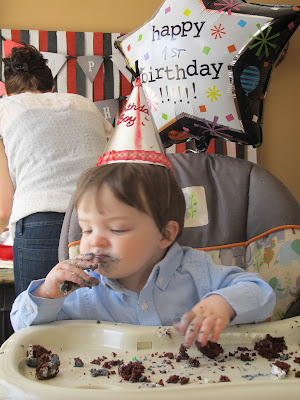 ... has changing tastebuds. He started out eating almost anything we'd give him and the transition to chunky foods was well received. That has all changed over the last month. He now spits out anything that's not fruit or toast or cereal, so we hide a lot of veggies and meat in apple sauce.

... repeats sounds and some simple words. There's still no mom or mama, that comes out "Bob, Bob", but he does say da da, hot, and hat.

... loves to read. He'll flip book pages on his own and loves to be read to, especially anything with touch & feel or flip-up pages.

... is happy to see his daddy. When daddy walks in the door at the end of the workday there are huge gummy grins and an all out sprint to get scooped up. Super sweet.

... loves his blocks. He could play with those for hours (well minutes, but that's like hours for babies). You can stack 'em tall and he'll knock 'em down over and over again. Fun times.

... is becoming more independent every day. He's good to play on his own and toddle around as long as you're in sight. He can feed himself when given food on his tray, and holds his sippy cup on his own.

At just 12 months we can see that this little guy is really growing baby to boy. And yes, it is happening a little faster than we like or expected, but we love it all the same. And we love him. 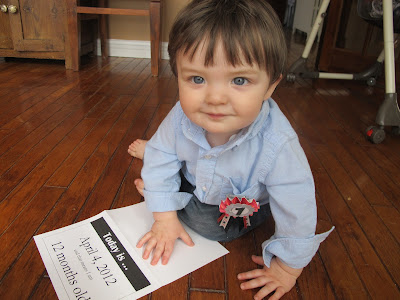 Happy 12 months Hudson P.
You are the best part of our everyday.
xoxo

Happy 1st Birthday Hudson! You're such a cute little guy!