Taking a break from the Project Life fun to share a simple layout with you. I made this back in early may at the Paperie retreat as well. I really wanted to capture Hudson's first haircut in his scrapbook album and how he was such a littel superstar through the whole thing. I think it helped he was only 8 months old at the time, so perhaps a little too young to be frightened of it all. He sat pleasantly through the whole thing and looked extra cute after it was all done: ﻿ 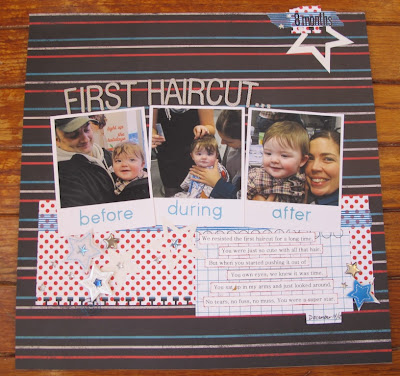 In making this one, I chose a bold patterened paper background and then layered with a bold dot print, punched iwth the notebook edger punch. ﻿A strip of washi tape over that and a tabbed journaling car was put on top. I decided to mat the pics in white to help them pop off the page, and used light grey letter stickers by Amy Tangerine for the title.

I embellished them empty space next to the journalling with a cluster of stars - a mix of felt, glitter, and metal - to reflect the journalling about him being a superstar: 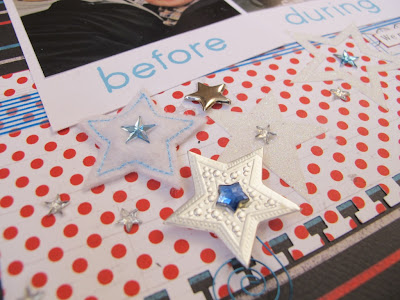 I also added a glitter star, a strip of the punched dot paper, and a strip of washi tape in a cluster at the top. This picked up the look of the page and gave me a place to note Hudson's age. 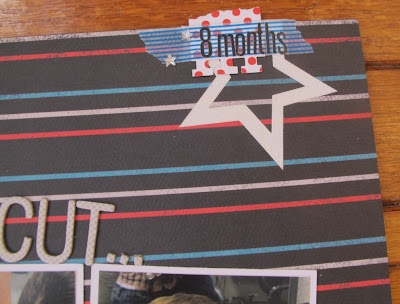 I really like the way this one turned out. Now I should probably do his second haircut, which came before he was a year old. Yep, the kid had two haircuts before he had any teeth and before he turned one. Crazy I know! We're already gearing up for haircut number 3 .. which you can see is long overdue (pun intended!): 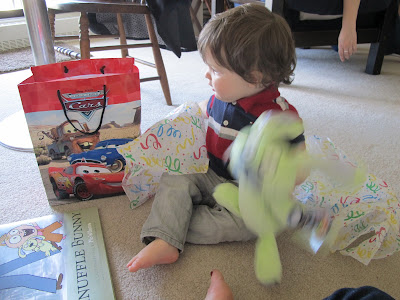