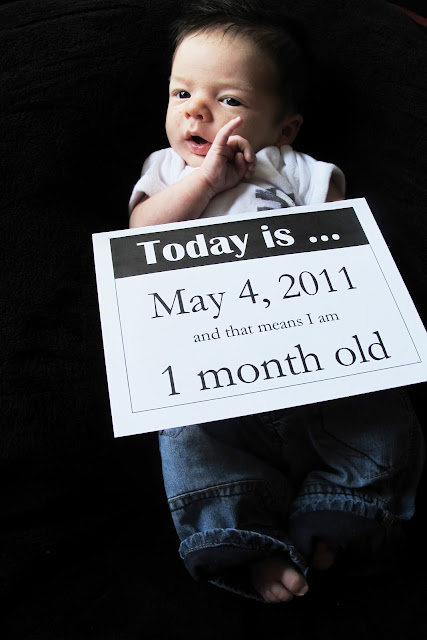 I can hardly even believe that our wee one is one month old. It seems like we were just
(im)patiently waiting for him to arrive and he's now been with us for four whole weeks!

... loves to be snuggled and cuddled, especially on our chests.

... strongly dislikes being placed on his back, whether for naps, diaper changes or playtime.

... is a very happy camper in his swing. I wholeheartedly commend and thank the inventors of this marvelous contraption.

... has finally started to put on weight, a welcomed addition after a couple of weeks of little to no gain.

... has only just moved out of newborn-sized diapers and sleepers.

... still keeps his little hands up by his face, just like he did in the womb, often looking like he's ready to fight.

... eats about every three hours and sleeps a whole lot in between - just not always during the wee hours of the morning when mama would prefer it.

... is starting to turn toward and follow toys and faces and sounds.

... resists being swaddled up tightly like a baby burrito, but usually calms within minutes once he's been wrapped and cuddled. Thank you Dr. Karp for the perfecting and sharing the technique.

... has been given nicknames of Little Chicken and HP.

... doesn't cry a lot, instead makes a lot of little noises that sound like a cross between a baby sheep, mewing kitten, and a little pony. {Note to self: get that on video before he stops making these sweet sounds}

... has the sweetest smile and baby pout {even if both are gas-induced} and mama already knows it will be hard to say 'no' when he breaks out either on her as he gets older.

... has easily stolen the hearts of his large and extended family, most notably that of his mama and daddy. 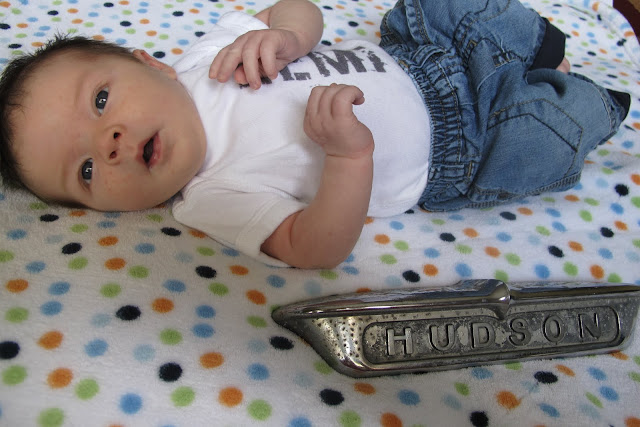 I can't believe he's a month old already! Didn't you just call me the other day to tell me he was here?? Wow!

One month old already?! He's so beautiful. He looks like Des but your mom sent me a picture a few days ago that had just been taken and oh, I could see in that one that's he's just like his mom! He's the best of both. Enjoy!!