Runday Monday: Give Yourself Credit

I started last week missing my mojo. I guess the lost hour of sleep impacted me more than I expected. Right from the get go I just couldn't find my get up and go. Seems it stayed in the bed.

I had plans for a short run and strength workout Monday morning, which quickly became just a strength workout. Blamed it on the lost sleep. Tuesday was supposed to be a 10km tempo run according to my half marathon training plan, but I just couldn't bring myself to even lace up the shoes. Wednesday I forced myself onto the treadmill for that missed 10km so I could stay on track with the rest of the week's runs. Halfway through the tempo slog and I was just barely hanging on, but refusing to quit, wondering why on earth this week was so freakin' hard.

I was looking down at the red glow of the numbers tracking my every step for what felt like the millionth time and that's when it struck me. I needed to just give myself more credit. Yes, this week was a rough one, for whatever reason. I skipped runs two days in a row and was finding the one I was doing much harder than usual. But, I was running and running well. The red glow of the screen showed I was pacing my interval at 6.8 miles per hour. And for me that was better than not bad on a rough day.

I started thinking back over the last 11 weeks of running. I began the half marathon training program the first week of January after pretty much a year without running or running fairly irregularly. Despite regularly running at least 5km three to five times a week before that, even getting to 5km back in January was tough. And my easy pace was barely 5.6-5.7 miles per hour and my speed intervals were not much faster and barely breathable for a half kilometre distance. I was slower than I was used to, not able to log the distance I was used to, and simply not used to it all anymore. But I stuck with the training plan run by run, week by week, for 11 weeks.

Now, here I was logging a 10km run during HPs morning nap and, even though it was tough to get it done, I did it. I noted that my easy pace now, even during that tough morning, is a comfortable 6 miles/hour, with intervals of at least 6.7miles/hr, for 2km distances. I also remembered that I haven't missed one run on the training plan. Each week I logged the requisite runs and distances, no matter what. And I followed that tough 10km up with another on Thursday, a shorter run on Friday, and a 15km long run on the weekend. In fact, since January I've logged at 280kms or 175 miles in total, the equivalent of more than 6.5 marathons. In just 11 weeks, less than three months, I see improvements in strength, speed, endurance, cardio capacity and overall ability to run. All that deserves credit. In the midst of 10 hard kilometres on a treadmill in my garage, I gave myself the credit I deserved. 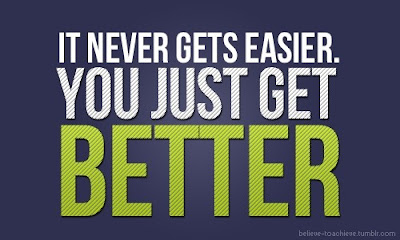 And I did it again yesterday morning when I went out for my 15km long run. The start of the run is a steady incline, which always makes it tough to get going. I was lumbering along when I passed her. This girl in her fancy running tights, you know the ones with the nice reflective stripes on the back, and her brightly coloured running jacket, and her running toque with the ponytail hole in the back, and her perfectly fitted shades, gliding like a gazelle down the hill on the opposite side of the road. You could tell she was that person who loved running. In that moment I, in my ratty yoga pants, baby blue fleece hat from like 10 years ago, my purple jacket, my cheap paparazzi-esque shades, and my mismatched mini-gloves, wanted to pack it in, whip around, and head for home.

I hate hills to start, so I already felt like I was running like a bull moose in a china shop. I was pretty beat from a sleepless night with HP and his head cold the night before and each step was calculated. I barely got up the gumption to get out the door as my lack of mojo followed me through to Sunday. As I pushed each step up the hill, I was longing to be home on the couch in my PJs with a cup of coffee and my family. But just as I watched the gazelle-girl breeze by, I thought rather than feeling blah about all of that, I should give myself credit that despite all of that I'm out pounding the pavement and logging almost 9.5 miles on a sunny Sunday. So that's what I did.

I may not be a gazelle. I may not be a speed-demon. I may be slogging it some days. But nonetheless, when I could easily just pack it all in and quit or say I'll skip this one run, I don't. Instead, I've stuck it out and I've improved. All good. Try it sometime. Try giving yourself credit when you're feeling a bit blah - I'm pretty confident you'll find it helps keep it all in perspective.
Posted by Colleen Ryan at 8:00 AM